This third episode is the opportunity to reflect on the past year and to look back at the events that contributed to international development of squash as a sport resolutely turned to innovation, sustainability and diversity. Enjoy the read. 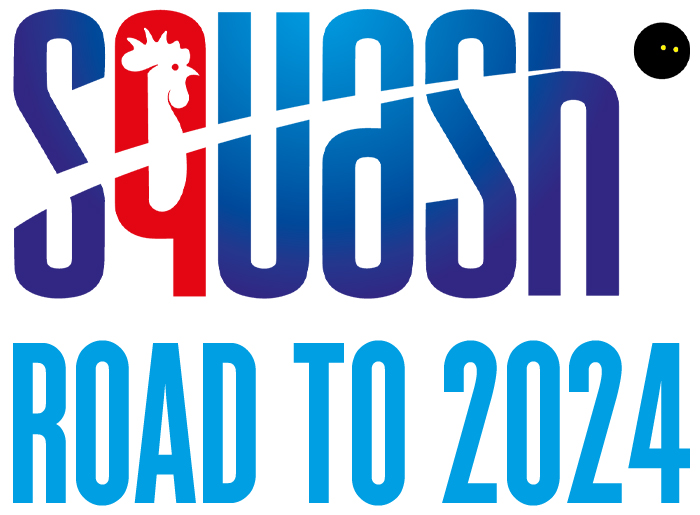 The Saudi PSA Masters was held at the beginning of January in the capital city of Saudi Arabia - Riyadh. This milestone tournament was unanimously praised by the players and the public as the first- ever professional female sporting competition taking place in the country. "I am extremely proud to have been part of this historic tournament," said the winner Nour El Sherbini. "I want to thank everybody that made this event possible for us, especially HRH Princess Reema and Ziad Al-Turki. I hope to come back next year to defend my title." Al-Turki – both Saudi Squash Federation President and PSA Chairman – recently shared his optimism in a leading Saudi newspaper Arab News about future tournaments as well as the growth of the sport in the kingdom.

British Junior Open and Tournament of Champions make the headlines

As every year in January hundreds of youngsters from all over the world travelled to the UK for the prestigious British Junior Open – held for the first time in Birmingham, which will also host the squash competitions at the 2022 Commonwealth Games. In the medal rankings, Egypt's domination (four titles) was challenged by England (2 titles) and Malaysia, who won four of the five girls events. The Azman sisters were the first siblings to be crowned in the same year. Meanwhile on the other side of the planet, the Tournament of Champions, with its glass court set up in the Grand Central Station, New York, where millions of commuters go through on a daily basis, proved again to be the most attended squash event in the world. 2018 winners were Nour El Sherbini and Simon Rösner, who became the first German player to win a major squash tournament.

With $500,000 worth of prize money split evenly between the men’s and women’s draws , the Windy City Open in Chicago became the most lucrative PSA World Series tournament of all time. While Mohamed ElShorbagy won comprehensively against his younger brother Marwan, taking the World No.1 in the process, his fellow Egyptian Nour El Tayeb saved two match balls before overcoming Joelle King, 12-10 in the fifth game after 78 minutes of play – the final will receive the Match of the Year award later. Meanwhile, the PSA announced that the next World Championship would take place in Illinois, in February 2019, with a record-breaking $1 million prize fund, thanks to the support of main sponsor Mark Walter. 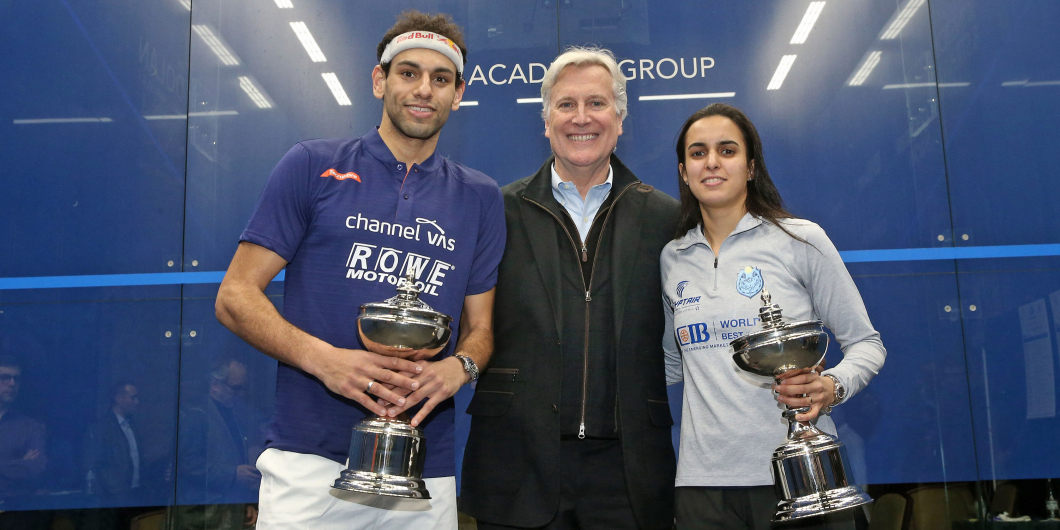 Squash at the Commonwealth Games 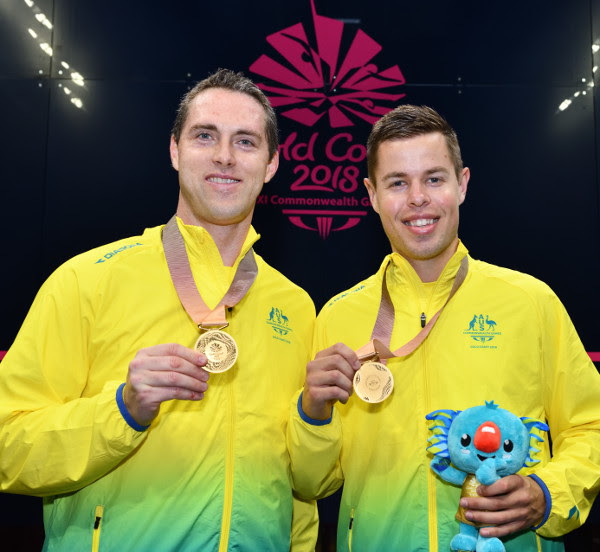 Squash celebrated its 20th anniversary in the Commonwealth Games. which, along with other high-profile international multi-sport events such as the World Games, Pan American Games and Asian Games have been providing our sport with a high-level testing ground for the latest showcourt, refereeing and broadcast technologies, as well as a platform to showcase the legacy that Squash is capable of leaving to the host cities and countries. The Commonwealth Games have indeed left significant tangible legacies in Delhi, Glasgow, Kuala Lumpur and Manchester, where the Squash venues have become major centres or the sport's National Centres, providing access to high-performance training and competition for thousands of young people over the years. James Willstrop dubbed his win in the 2018 edition in Gold Coast, Australia - in front of almost 4,000 people packed in the stands of the Oxenford Studios – as “probably (my) best title.” Other heroes were New Zealand's Joelle King, gold medalist in both singles and doubles, as well as David Palmer. At 41 years old, the Aussie ended his playing career on a high, his title in doubles alongside Zac Alexander extending his record medals haul to nine, in six appearances in the CWG since 1998.

Rodriguez pushes the borders at the British Open 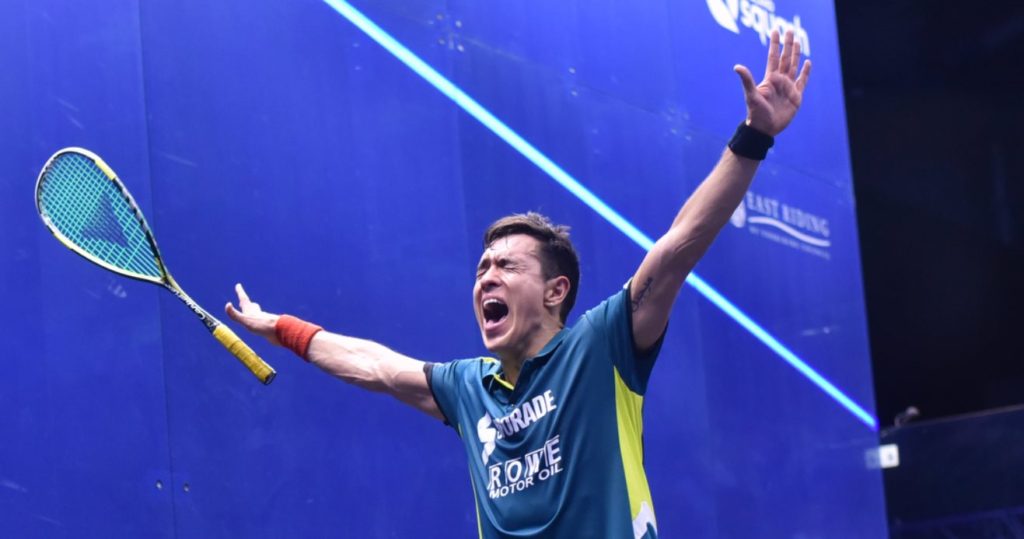 While Nour ElSherbini came out as the victor against big rival Raneem El Welily, Miguel Angel Rodriguez wrote history after an epic win in the 96th British Open – the oldest tournament in the sport. It took 102 minutes to the Colombian Cannonball to overcome World No.1 Mohamed El Shorbagy, who had a very tough route to the final but fought until the bitter end. The 32-year old, who beat four Egyptian players in Hull (Ashour, ElShorbagy, but also Mosaad and Farag) became the first South American player ever to lift a major trophy, as well the first unseeded player in the modern era to win the iconic event.

The Wolf will no longer roar

Mohamed ElShorbagy and Nour ElSherbini confirmed their status of World No.1 in the World Series Finals, held at the Emirates Golf Club in Dubai, but the other highlight of the week was Nick Matthew's definite farewell. “The Wolf” thought he had ended his professional career at the British Open, but Marwan ElShorbagy's last minute withdrawal gave him one more chance. He did not come to the UAE make up the numbers, and after winning his 3 pool matches he fell to an impressive Ali Farag in the semis. The Egyptian, as well as the crowd, paid him an emotional and well-deserved tribute: his 20-year long career was filled with 35 titles on the tour including three World Championships titles, as well as 3 gold medals in the Commonwealth Games and three World Team Championships crowns.

Squash at the South American Games

For the second time – after 2010 - squash was part of the South American Games, in Cochabamba, Bolivia. Diego Elias and Peru took advantage of Miguel Angel Rodriguez not featuring to dominate the men's events but Colombia still clinched the three gold medals in the women's. 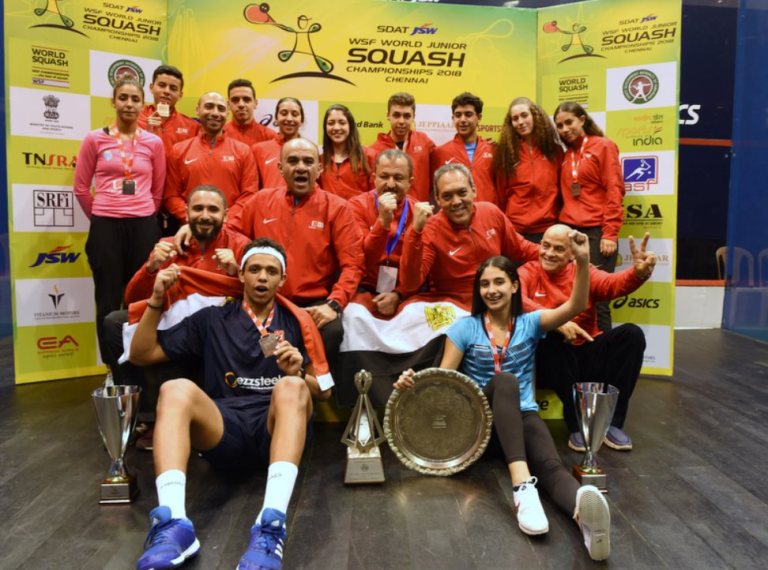 Egypt did not leave the other nations much chance to shine at the World Junior Championships in India (Photo credit: #WorldJuniors2018)

The Pharaohs did not leave other nations much chance to shine at the World Junior Championships in Chennai, India: the individual event featured two all-Egyptian finals on the glass court set up at the Express Avenue Mall. Rowan El Araby kept her crown thanks to her win over Hania El Hammamy, and an impressive Mostafa Asal dethroned Marwan Tarek. These two players also clinched the team gold medal with their country, while Czech Republic's bronze medal was their first ever in the event.

The 23rd Central America & Caribbean Games were held in Barranquilla, Colombia. In front of his home crowd, Miguel Angel Rodriguez claimed his third consecutive title, but Mexico was the dominant country, with five gold medals in seven events.

WSF World Masters Squash Championships: for the love of the sport 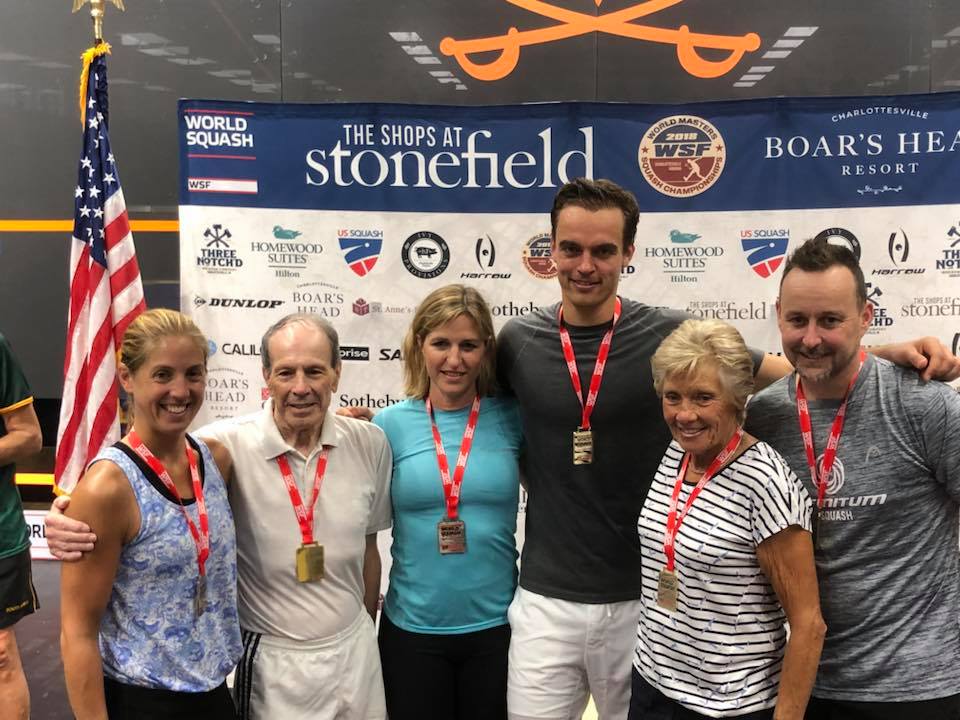 The WSF World Masters Squash Championships, which took place for the first time in the U.S.A. - in Charlottesville, Virginia - at the beginning of August gathered about 750 athletes from 60 countries all over the world. Australia emerged with the highest number of gold medals (6), thanks among others to squash legend Sarah Fitz-Gerald, who won her third consecutive gold medal in the O45. The 5-time World Champion and former World No.1 extended her extraordinary winning streak, having not lost a match since 2001! "I love this sport," said Fitz-Gerald, now a WSF Vice President. "I still have the fire burning inside, and I think all of the old pros here still have that and want to see what they can do. As we all know we may get a little bit older and slower, but the game is still there. I love the event, the friendships and team spirit between nations." There were a bunch of former top 15 players in the Men's O35 draw, and Dutchman Laurens Jan Anjema came out on top, beating Alister Walker in the final.

This year's edition of the Gay Games, hosted in the future Olympic city of Paris, marked the 8th time squash is part of the official programme of the event. About a hundred squash players participated in a packed week of action at the Charléty Stadium. Winners were Frenchwoman Véronique Chastres and Englishman James Wilson.

Amanda Sobhy was the star of the Pan American Championships, held in Cayman Islands. The American number 1 won the single event beating her younger sister Sabrina in the final, and then the women's double and team event alongside her.

Squash at the opera 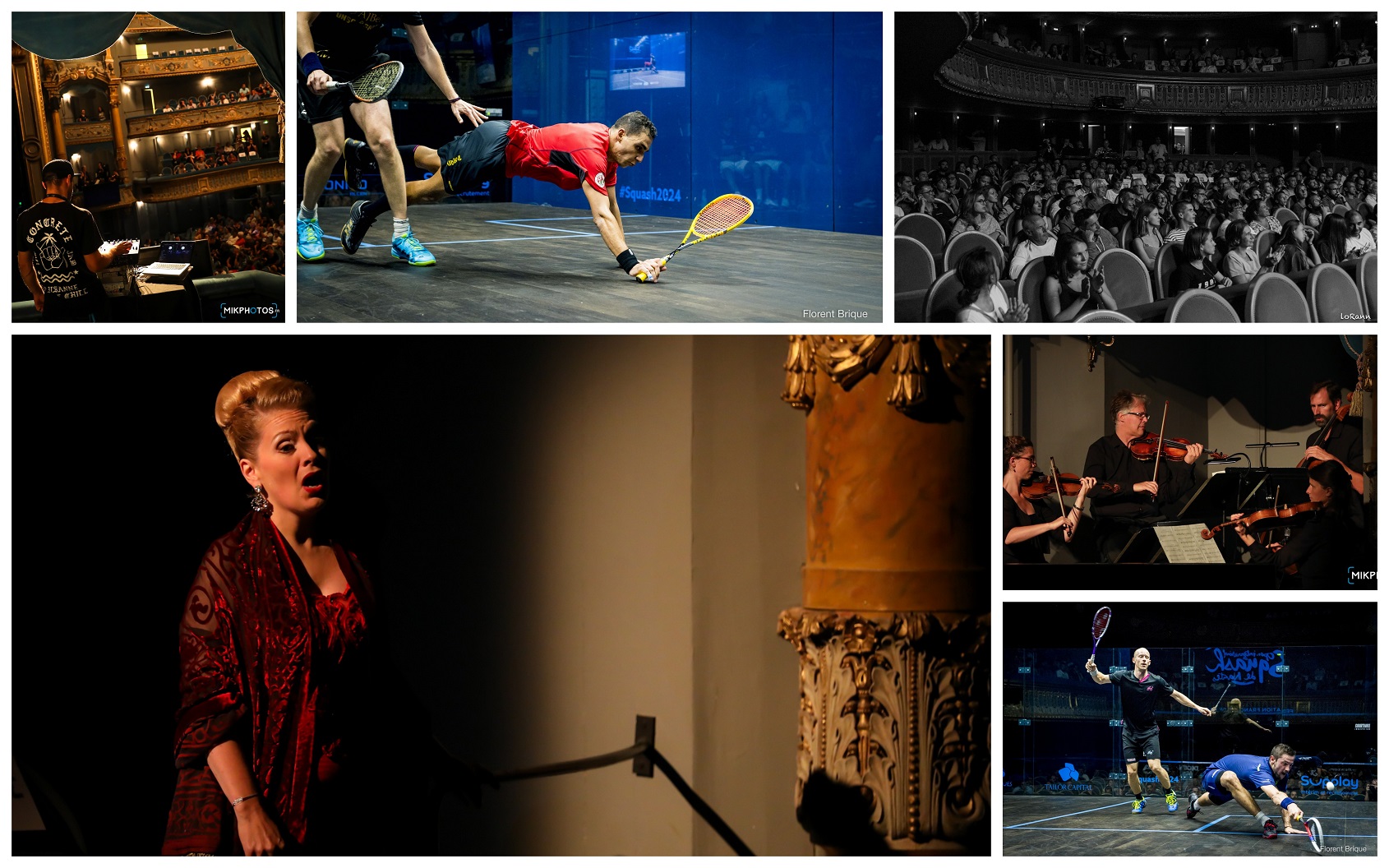 The 4th Open International de Nantes was an encounter between sport and music, in front of a delighted crowd (Photo credits: Philippe Rochais, Florent Brique, Mikphotos and Lauranne Rochais)

For the fourth consecutive year, the organizers of the Open International de Squash de Nantes set up an amazing event and proved once more that squash can reach a wide audience in France. This time, the players had the opportunity to perform on a state-of-the-art all-glass showcourt, erected in the beautiful setting of the Théâtre Graslin – an opera built at the end of the 18th century – and each match was opened by a musical performance featuring the soprano Anne- Sophie Duprels. “I’ve seen some amazing tournaments here over the years and this is an incredible place to play squash," said former World No.1 James Willstrop. "I sat and watched the opening phase and it was absolutely breath-taking.” The Englishman lost to compatriot Declan James after a 5-game thriller, while Belgium’s Nele Gilis claimed the women's trophy. “The Open International de Squash de Nantes has gotten bigger and better year after year and we are delighted to see the tournament reach even greater heights over the past week” said PSA Chief Executive Alex Gough.

The first world squash championship ever to be held in China took place in September, when the city of Dalian hosted the 2018 WSF Women’s World Team Championship. It was also the first time that an event was played entirely on glass courts - two all-glass showcourts as well as four permanently-sited all-glass courts. For the fifth time in the last seven editions, Egypt and England clashed in the final, and the former prevailed, like in 2016 in Paris.

The highlight of the 18th Asian Games in Jakarta, Indonesia, where squash was featuring for the sixth time, was Nicol David's victory in the singles event. Recently voted as the female GOAT (greatest of all time). Malaysian superstar celebrated her 35th birthday by claiming a record fifth gold medal - 20 years after winning her first. She fought back from 2/1 down to overcome her 19- year old compatriot Sivasangari Subramaniam.

Squash showcases its assets at the YOG 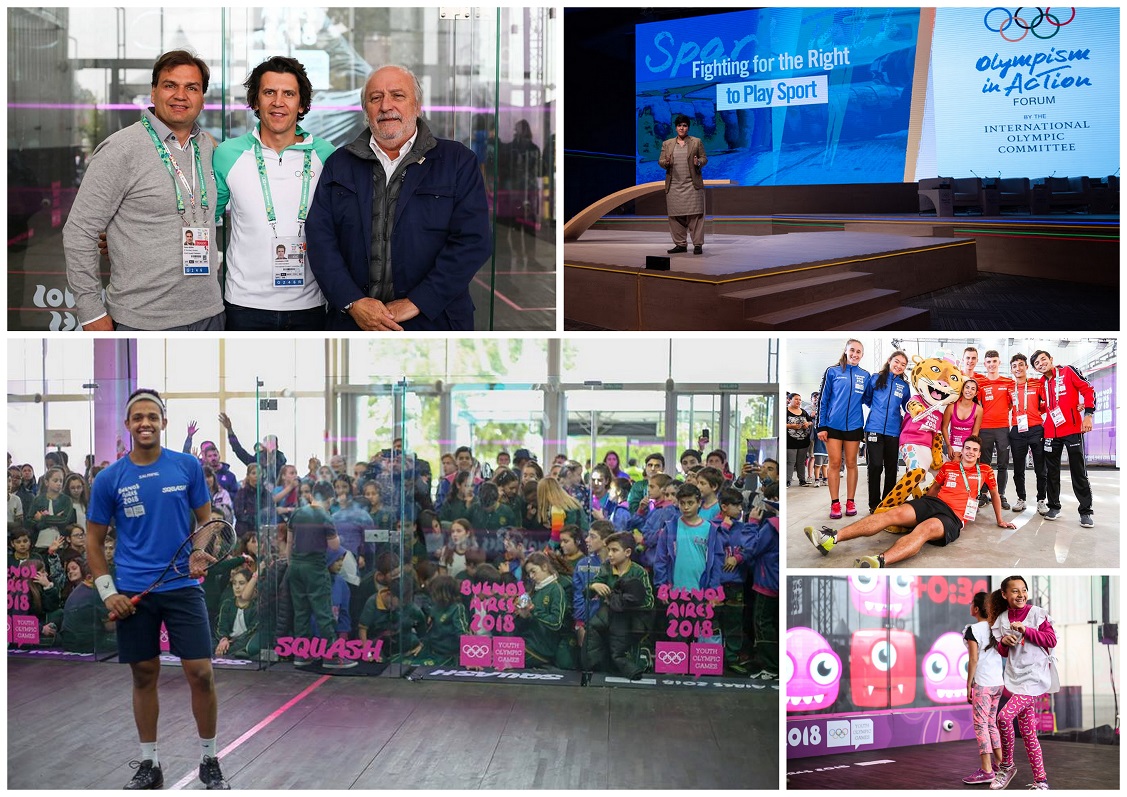 October 2018 will remain in history as an important milestone for squash. For the first time in its history, squash participated as showcase sport at the Youth Olympic Games in Buenos Aires. It was a great opportunity for squash to demonstrate its assets, as well as an important step in its bid for Paris 2024. We had looked back into a successful Argentinian campaign in our first episode ROAD TO 2024: LOOKBACK ON THE YOUTH OLYMPIC GAMES.

King is the queen of Hong Kong 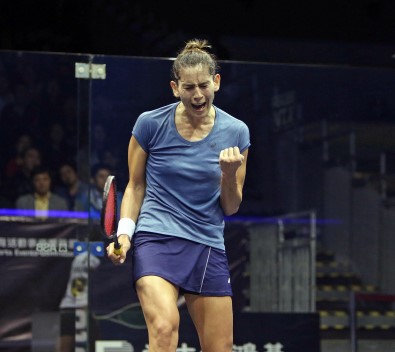 There will be several things to remember from the 2018 women's tournament in Hong Kong: since Laura Massaro's wins at the British Open and World Series Finals at the spring of 2017, no non- Egyptian player had won a major tournament. Coming through as the victor after 3 hard fought games against Raneem Welily, Joelle King also won the first ever Platinum (formerly World Series) event of her career, at 30 years old. After a very successful past season - she was runner-up at the Windy City Open and gold medalist at the Commonwealth Games - the Kiwi had not started 2018- 2019 in the same fashion before her superb run in Asia, where she beat Nour ElTayeb, Sarah-Jane Perry and El Welily. “I’m just extremely happy to win my first platinum event ever,” said King. In the men's draw, the clash between the World No.1 and 2 did not quite live up to the expectations, because of an impressive display from Mohamed ElShorbagy, as the 'Beast of Alexandria never let his rival Ali Farag into the match.